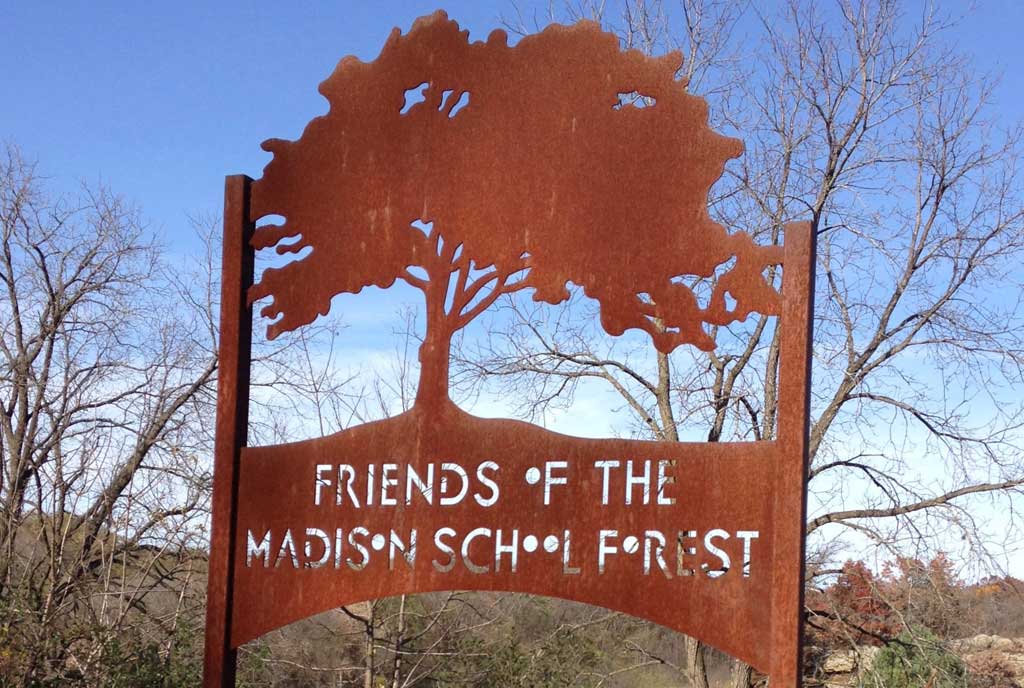 The forest includes the Olson Oak Wood State Natural Area, a prime example of a Wisconsin southern dry forest with remnants of pre-settlement days. Other ecosystem examples are the Jerome Jones Pine Plantation planted by Madison School District staff and students and an open field area.

Over 40 species of birds live and nest in the School Forest, with many more migratory birds that can be observed seasonally. A rustic camping area features a kitchen, nature center, shelter, four sleeping cabins, and restrooms with access for people with physical handicaps

Many individuals worked to make MMSD’s School Forest a reality, and others continue to provide environmental experiences for today’s students and families. Join the Friends of the School Forest and help to sustain this tradition into the future.

Sometime in the late 1600’s or very early 1700’s, a white oak acorn rolled to a secluded resting spot in the southern Wisconsin grasslands and took root. The little oak survived life on a savanna, prairie fires, and the onslaught of settlers’ wagon wheels. As it grew, its spreading roots threw up annual shoots into the prairie that grew into “grubs,” huge entwined underground anchors that bedeviled farmers and supplied the young trees which eventually became a forest.

The first European settlers to own the land where the acorn lodged were the Stewarts, beginning in 1845. This crowded stand of white and bur oaks on sandy, steep and rocky hillsides proved too overwhelming for the farmer’s plow. About 300 forested acres remained and flourished as the surrounding land was tilled to farms. Today, that same gnarled and knobby white oak is known and loved by thousands of school children as the Grandfather Tree, and it’s a living monument to tenacity in the Madison School Forest.

From 1950-58, Don Stewart cut nearly 650,000 board feet of lumber from the forest and sold most of the white oak to the Frank J. Hess and Sons Cooperage in Madison. They made and repaired beer and whiskey barrels that were shipped all over the country. Hess and Sons was the last operating cooperage in the United States, closing in 1973. Other lumber from the forest went to a furniture factory in Green Bay.

When Stewart considered selling the land, an interested buyer wanted to clear-cut the woods to make charcoal. Fortunately, Stewart turned him down. He was approached by Bill Roys and Joseph “Bud” Jackson, who proposed using the hilly land southwest of Madison in the Verona countryside as a school forest. Stewart agreed. He sold 160 acres for $20,000. Roys was an executive of the General Casualty Insurance Company. He had quarterbacked the World Championship football team from Madison Central High School in 1897. Jackson was a good friend of Roys who had been an athletic trainer at the high school. They shared a love of the outdoors and a belief that students needed the natural environment for real life experiences.

When Don Stewart sold them the land for the Madison School District, he placed a deed restriction limiting its use for school forestland in perpetuity. During the next two years, 80 adjoining acres were purchased from the Malloy family who had owned the land since 1867, and soon after another 60 acres were purchased from the Andreas family in Belleville. A one-acre rocky outcropping on the Lamberty farm was purchased and later called “Paul’s Rock”, in honor of Paul Olson, who had persuaded his friend Bud Jackson to buy the land for the school district. Olson, the principal of Midvale Elementary in Madison, had started a work-learn program for middle school boys in the mid-50s when he stumbled across the 160-acre Stewart parcel.

Olson had the vision for the forest plan, dividing the parcels into a forestry demonstration area and an undisturbed natural area for study. Olson recruited Dr. James Zimmerman, who pioneered the ecology/teaching program at the forest.

Zimmerman was a dedicated naturalist, teacher and botanist who was committed to teaching people to care about the outdoors, and to appreciate and conserve the plants and wildlife near their home environment. He was joined at the forest by Virginia Kline, who became one of the first guides/naturalists and the first coordinator of the forest’s Outdoor Education Program from the early 1960s through early 1970’s. Kline, Zimmerman, Olive Thomson, Ronnie Saeman and others formed a core group of naturalists who taught children to become keen observers, to “read the landscape,” and to understand their relationship to the natural world. (Kline later returned to grad school, earned a Ph.D. in Botany and became the UW Arboretum Ecologist from 1976-1997.)

In 1963, Zimmerman and Olson authored the “Madison School Forest Guidebook,” which is still used today. It includes the history of the land, a detailed reference to the plants, animals, and birds found at the forest, and a field guide with sketches of plants and animal tracks. A fourth grade teacher David Spitzer, and his students at Lincoln Elementary School published a newer guide by kids for kids in 1997.

In 1996-97, nearly 120 acres of the school forest were sampled by DNR biologist Rich Henderson. He is mapping the forest, recording the types and numbers of trees, shrubs and plants in each designated quadrates, repeating similar surveys taken on the same plots by renown botanist Grant Cottam 50 years earlier.

Significant changes had occurred in the intervening years. At the time of Cottam’s study, the site was a closed canopy “xeric” (dry or lightly shaded) woodland dominated by white oak, as it had been for the previous 90 years. From 1946 to 1996, tree composition changed as heavy shade-producing trees like red maple gained a foothold. The shade-intolerant oaks lost ground. For every “mesic” (medium moisture or heavily shaded) tree that took hold, more than two xeric species declined by 80 percent or disappeared.

Today the oaks comprise less than 70 percent of the school forest because they don’t regenerate well in the heavy shade of mature oaks and successful “mesic” species. A management committee of school district personnel, naturalists, environmentalists and DNR experts is using controlled burns and selective cutting to maintain the oaks, remove competing species and plant seedlings grown from the school forest’s acorns.

More than 40 species of nesting birds live in this oak forest, including the threatened Cerulean warbler. Many more migratory species stop over spring and fall. The forest is so ecologically significant that 166 acres have been dedicated as a State Natural Area.

As rapid development continues in the county, the Madison School Forest becomes more important than ever as a special place of natural beauty, biological diversity and an important educational environment. More than 5,000 public school students visit the forest annually and another 3,000 children in youth groups learn about nature here first-hand. The YMCA makes extensive use of the campground facilities and by running a summer day camp. Scouting troops stay here, too.

The naturalist program begun by Kline and Zimmerman continues to link the schools to this gem of a teaching lab. Each year 12 guides are trained to work with children here and at the UW-Madison Arboretum. On the trails, the guides supplement their teaching with stories, games, and a knapsack of hands-on artifacts such as deer skulls, feathers, galls, and other found objects. The naturalists and teachers who engage these students feel strongly that a lifetime interest in the natural world will result from these early journeys to the Madison School Forest.

David Spitzer brought his Lincoln Elementary students here six or more times per school year to integrate outdoor experiences with science, math and language arts classes. His students also conducted service projects like erecting bird boxes, trail posts and writing the guidebook to give something back to the forest.

School districts statewide are challenged to continue funding a wide range of programs like outdoor education. Transportation costs to send each class once per year to the forest were targeted for elimination in the budget discussions by the Madison Board of Education. If parents and students have to pay the way to their outdoor classroom, some will need help. Such concerns have led several districts, including Madison, to develop a “friends group” for the school forest. Naturalists, schoolteachers and caring citizens joined the school district to provide money to maintain and expand the environmental education programs, purchase adjacent land to provide a buffer from development, and support research in the forest communities.

In partnership with the DNR, and mentors from The Nature Conservancy, the forest friends group recently raised $40,000 to contribute toward purchasing 20 acres plus an eight-acre easement of oak and hickory woods at the forest’s northern edge; the parcel was slated for subdivision into homes. Development at the forest’s edge and accompanying new roads, cut trees and clearings erode the overall health of the forest and change its animal life.

A seasonal newsletter, the Leaflet, keeps members and property neighbors up-to-date on developments. A companion website includes information about the forest, shares the new guidebook and links to other sites.

Our nation’s school forest tradition began appropriately enough in Forest County, Wisconsin in 1928. Dean Harry Russell of the UW-Madison College of Agriculture, who had seen children planting trees on public lands in Australia as a school project, introduced the concept.

Russell thought the idea could help recover acres of abandoned lands in the northern Wisconsin cutover. He found kindred spirits in Wakelin “Ranger Mac” McNeel and Fred Trenk, a UW-Extension forester. McNeel was a state 4-H leader who believed that sound attitudes about the outdoors would be born of experiences and good habits acquired by training. He encouraged students and teachers to reclaim logged burned-over lands with tree seedlings and planting spuds.

Russell spearheaded legislation to allow school districts to own land for forestry purposes. By spring of 1928, three school forests were dedicated in Laona, Crandon and Wabeno. Legislation in 1935 mandated the teaching of conservation education in all Wisconsin high schools, vocational schools and colleges. In 1949, the legislature directed the state to provide a free tree to each fourth grade student on Arbor Day. The tradition continues today as school and community forests are located in every county in Wisconsin.

In 1928, those Forest County children understood what needed to be done to correct the mistakes of past overharvests. Programs in today’s school forests want to keep that ethic alive. In this small parcel, we echo the words of our environmental grandfather, Aldo Leopold. “Like winds and sunsets, wild things were taken for granted until progress began to do away with them. Now we face the question whether a still higher ‘standard of living’ is worth its cost in things natural, wild, and free.